Comprising thirteen more brand new selections, Moments in Time Part 2 reminds listeners of why his debut LP was such a sought-after release. The album opens with ‘Let You Fall’, drawing for old-school breaks and emotive voice overtures. Meanwhile, Ella Sopp joins Philth once again for ‘Just a Memory’, with her luring vocals streaming through […]

Dispatch Recordings returns to Timisoara, Romania with Freenetik Party on 22nd February joined by Nymfo & Arkaik at Escape Underground Hub. More information including tickets can be found via Facebook here. 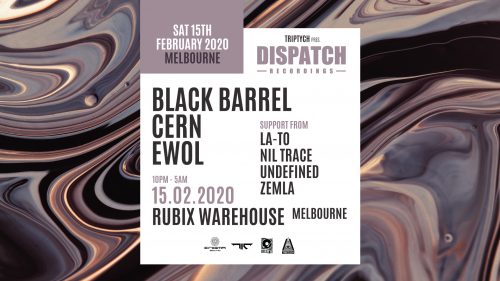 As long term fans of the Dispatch sound Genic created ‘Garlic & Herb’ with Dispatch Recordings in mind. Aiming to recreate the flavour of the old school tech sound, but with modern techniques this two-track release sees the duo build on their influences with flare. Buy Links: • Dispatch Store – https://bit.ly/DIS144W • Bandcamp – […]

An oscilloscope is a laboratory instrument commonly used to display and analyse the waveform of electronic signals. In effect, the device draws a graph of the instantaneous signal voltage as a function of time. For this EP, Brain set out to explore the idea of the physicality of sound, and how comparisons can be drawn […]

RE.SET and Video Club present the launch of the newest release on Dispatch Recordings – Brain’s ‘Oscilipscope’ EP, at Video Club in Bogotá, Colombia, on 28th November 2019. The launch will see Brain performing, with support from fellow label signees Asura & Sequences. For more information including how to purchase tickets please follow this link.